The 10 Types of People You Hate on the Tube

On a good day, using the London underground can be easy, stress-free and extremely efficient, however on a bad day, especially during commuting hours, you’ll be rushing through crowds and squeezing onto the stuffy carriage, and encountering one of those people that just really grinds your gears is not what anyone wants – so make sure you’re not one of them! 1. The one with the big backpack

It is absolutely bafflingly that someone simply going to the office for the day could have a backpack so giant. However, the problem lies in the fact that the person wearing the backpack usually has absolutely no concept of just how huge the load on his back is, and while walking down the carriage, proceeds to hit everyone around him in the face. 2. The one who presses the buttons on the tube door

Just as this person reaches out for the ‘open’ button on the tube door, everyone else on the carriage is silently thinking ‘tourist‘. Regular tube users know that the doors open automatically, however, those foreign to the world of the London underground will stand there pressing away until the doors eventually open, but not because of the button.

3. The one who won’t move down the carriage

It’s commuting hour and crowds of people are sweating it out on the stuffy underground, all trying to get to work. The tube arrives and everyone is pushing to get on and that one annoying person just won’t move down the carriage. Standing in their masses of space, blissfully unaware, the rest of you are left cramped in the entrance or smushed up against the carriage door.

4. The one who listens to music too loud

No matter how noisy or silent the carriage is, being able to hear someone else’s muffled music protruding from their headphones can be really annoying. For starter, the fact that the rest of the carriage can hear the music over the noisy train line shows how ridiculously loud it must be and secondly (and quite frankly), if we wanted to listen to music, we’d have earphones in ourselves.

5. The one who waits for the barriers to shut

At rush hour on the tube, there’s nothing worse than being stuck behind someone who waits for the barriers to shut behind the person in front of them before then scanning their oyster or presenting their ticket. The barrier doors are designed for fast paced movement, why aren’t you?

6. The one whose bag needs a seat

It’s been a long day, you’re tired and although it would be nice to have a seat on the tube, someone’s large shopping bag has taken the only one that would be free. The owner of these bags is also usually quite sneaky as once they’ve strategically piled up the seat next to them with their numerous bags, they’ll busy themselves on their phone so as not to catch anyone’s eye (but knowing full well the amount of bad looks they’ll getting).

7. The one with the smelly food

The underground is full of people, pushing, and sometimes quite confined spaces, so when someone steps onto the tube and proceeds to stink out the whole carriage with a greasy, smelly bagged meal that definitely should have been eaten when it was bought, it can make a journey quite unpleasant.

8. The one who’s going on holiday

Understandably with the Heathrow express and reliable underground service, getting to the airport via public transport is easy and efficient however after having our toes crushed by the wheels of your massive suitcase and hit in the face by travel bags 2 and 3, we just wish you’d got an uber… and so does she!

9. The one who hasn’t mastered the escalator

One of the laws of the London underground is the knowing where to stand on the escalator (it’s even signposted). The right is for waiting, the left is for racing and people really do speed up the left-hand side, so only commit to walking if you’re prepared for the pace! 10. The one with no concept of personal space

Whether they’ve sat on your coat, stolen half of your seat or practically squashed your face into their armpit by holding the rail above your head, the one with no concept of personal space is not wasting time being polite, as long as he’s got enough room he’s happy (the rest of us definitely aren’t though!). 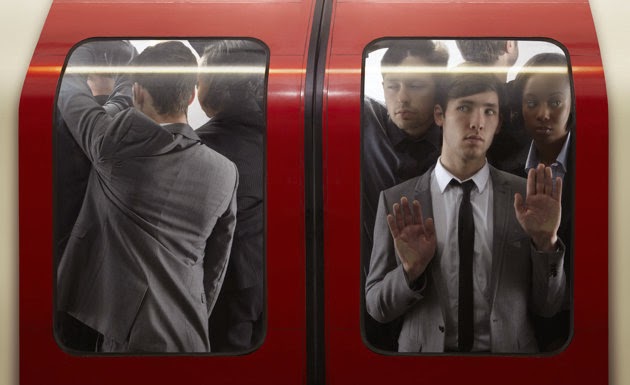 Cut your commute… live in a Professional Crib.

Our newest Professional Crib, 4 Kinsgley Avenue, has just completed its renovation and refurbishment! Click here to check it out.